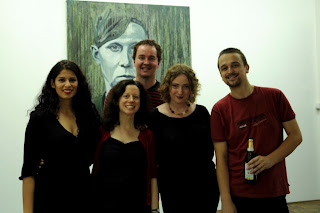 Our segment featured Svetlana Lavochkina, Stew Tunnicliff, Rima Chakaroun, Ralf Lowland and myself – Kat Steiger. We started with a flash-card reading blitz – each of us delivering phrases from Stew’s ‘Conflicting Thoughts’ on flashcards, then tossing them to the ground. I then began with ‘Blackbird’ – a piece written in honor of my father linking his turbulent childhood and Viet Nam. German and Russian translations echoed after. Svetlana then read an excerpt of ‘Crashattic’ – a short story set in Kiev and Novosibirsk during World War II. This piece was recently accepted by Witness, one of America’s top literary publications. Stewart next lured the audience with his distinct British phrasing through works marked by his homeland in ‘Legend Passed’ and ‘Capital Damage’. Rima’s ‘Rocking Horse of Time’ was another visceral portrayal of witnessed war, in Lebanon. Lastly, ‘800 Years’ was read by Ralf in both English and German – slowing to a close with the lines “Our Ireland’s neither dead nor gone, Tis sleeping it is, still” . . .
It was a unique performance that highlighted our variety of viewpoints and voices. We thank John Powers for the invitation and look forward to future projects amongst ourselves to continue to creatively collaborate on!

This site uses Akismet to reduce spam. Learn how your comment data is processed.